Our second blog post is by Amy Lovat, part of our current editorial teams, talking about her experiences at the Brisbane Writers Festival and on festivals in general. Have you thought about attending a writers’ festival? If you’re coming up to Newcastle this weekend for This Is Not Art / National Young Writers Festival /Critical Animals, be sure to come by the panel we’re hosting tomorrow (Friday 4 October 2013) at The Lock Up at 4pm.

The first weekend of September was a good time for me – the scent of Spring in the air, being able to wear less layers of clothing, and the Brisbane Writer’s Festival! Having family in Brisbane, I’ve had the pleasure of visiting many times before, but my experience thus far, I realised, has been limited to the sprawling ‘burbs, rather than the city itself. And my, what a pretty city it is. BWF was held in locations along Southbank – a fairly recently developed strip of riverside cafes, shops, Streets Beach (a man-made beach in the middle of the city – amazing!), rainforest walk and the cultural precinct which includes the Gallery of Modern Art, Queensland Art Gallery (QAG) and the gorgeous State Library of Queensland (SLQ).

After an early arrival on Saturday morning, my first experience of BWF was a panel called “The Rise and Rise of YA”, held in an open auditorium of the SLQ. The warm QLD sun was streaming in behind the audience, where we sat on white beach-style chairs under a high mirror ceiling, one wall lined with glass cabinets full of vintage china. I felt like I was at a yoga retreat until the panel began and I realised I was indeed at a writer’s festival, and a good one at that. Consisting of big name authors Justine Larbalestier (Team Human), Melissa Keil (Life in Outer Space) and 19-year-old Steph Bowe (Girl Saves Boy), the panel lasted for an hour and I found myself wishing it was longer.

Led by the brilliant cultural producer Carley Commens, the authors discussed topics highly interesting to me (and also crucial to my PhD research) such as the fact that 55% of Young Adult fiction is purchased and read by adults. All three authors asserted that there’s a hopefulness about reading characters who are that age, just starting out in their lives; they also all agreed that YA isn’t a genre but instead a marketing category defined by the age of the central protagonist. In that sense, it’s not necessarily for Young Adults, but about them, which explains why there is such a significant growth in crossover literature – think Harry Potter, Twilight, The Hunger Games. I know a forty-something-year-old woman with Edward Cullen as her screensaver and, trust me, she’s not in the minority. Given the stereotypical ironic narration (adult writer trying to reach teen audience) and forced censorship that is often associated with YA literature, it was also fascinating to hear those from within the industry saying things like “you can’t censor yourself” and using phrases like “The Twilight Curse”. Brilliant.

Next I attended the Agents Seminar in the QAG (which, by the way, has a two-storey high snake skeleton atop a fountain in the entrance) where top literary agents Hannah Brown-Gordon from New York City (NYC) and Sophie Hamley, president of the Australian Literary Agents’ Association, spoke about the merits of agency in book publishing. Points to take away from the session – agents are always searching for submissions, always follow the rules of submission as per the website, don’t attempt to flatter the agents, and make sure what you’re submitting is ready to be seen! Agents are basically responsible for managing your career as an author, so that writing is a long term plan; they will make sure publishers don’t screw you over, they will collaborate with you creatively on your manuscripts, and they will do the icky publishing contract negotiations for you. Just in case you didn’t know exactly what a literary agent does, because I certainly didn’t. Given the huge market in the US, the consensus from both experts was that having an agent is absolutely necessary in America, but not so much in Australia. Also, if you submit your manuscript to an agent, be nice to them! They receive well into three-figures of submissions each month and have to read them all in their own time – if you haven’t heard back from them after three months, you can expect a rejection letter following soon after.

After a leisurely stroll along Southbank in the 30-degree heat and a stomach-splitting sundae at Max Brenner, my next ticket was for a session called “The Book Was Better”, featuring a panel that had me pretty much star-struck. Strolling the stairs of the auditorium before the panel began was none other than Graeme Simsion, author of The Rosie Project, which is basically taking the publishing world by storm. We had a little chat about my thesis (!) before he carried on introducing himself to us plebs in the audience. What a guy. The Rosie Project actually began as a screenplay before he decided to write a full manuscript and go for publishing. Also on the panel was Melina Marchetta, of Looking for Alibrandi fame, Eddie Campbell, author of From Hell (ie the graphic novel on which the movie starring Johnny Depp is based) and Terry Hayes, author of I Am Pilgrim, who adapts screenplays (including From Hell) for the likes of Jerry Bruckheimer in Hollywood.

Of note was Melina describing adapting her books to film as “like smashing my book on the ground and picking up the pieces, putting them together in a totally different way and being okay to leave some on the ground” or words to that effect. Terry and Eddie were both of the view that “nobody in Hollywood gives a damn what the author thinks” though claimed unabashedly that they’re happy for producers to pay bucketloads for their manuscripts and basically have their way with it. Needless to say, it made me think hard about how I’d feel having my first baby [read: first published book] manipulated beyond recognition for the big screen. Terry then deepened the mood by eloquently explaining that “Screenwriting is poetry – it’s fitting maximum meaning into minimum words.”

My last session of the day was “Bright Young Things”, where two young authors – Anna Krien, author of Nightgames, and Chris Somerville, author of short story collection We Are Not The Same Anymore – shared with the audience their writing tips and advice, and discussed their favourite books of all-time. The session ended with a flash fiction competition where we all had to write a story featuring a donut in two minutes, and the first five writers to stand up at the end were able to read aloud their fiction. The winner won a huge book pack, among other things.

Day two – Sunday – saw another near-Summer day and some fabulous sessions, including “Gloves Off: What Writers Really Think of Digital”, featuring John Birmingham and Nina D’Aleo. There’s not enough room here to delve as deep into the world of digital publishing as we did that fine Sunday morn, but here is a brief overview. Rather than a panel of authors’ tirade on the death of books, it was a rather positive outlook. John affirmed that, given the cheap price of e-books, avid readers will still buy the hardcopy version of their favourites to adorn their bookshelves (something I am definitely guilty of) and that e-reader versions of popular magazines like The New Yorker have sparked 100 000 new subscriptions, hence a whole new wave of readers. Also, here’s a handy hint tried and tested by the Cheeseburger Gothic man himself – post three blogs a day and you can increase your traffic by thousands more a month! In light of all that though, 80 percent of an author’s income still comes from hardcopy books.

Next was a session on Lit Mags – are they alive and thriving or down to dust? I’m of the belief they’re the best things ever (not being biased here, promise!), as were the panel featuring Tom Doig, former Voiceworks editor, Sam Cooney, editor of The Lifted Brow, and Rob Spilman from NYC, editor of lit mag sensation Tin House. They discussed funding, the exponential increase in creative writing education, and whether lit mags are for writers or readers. The verdict: both. 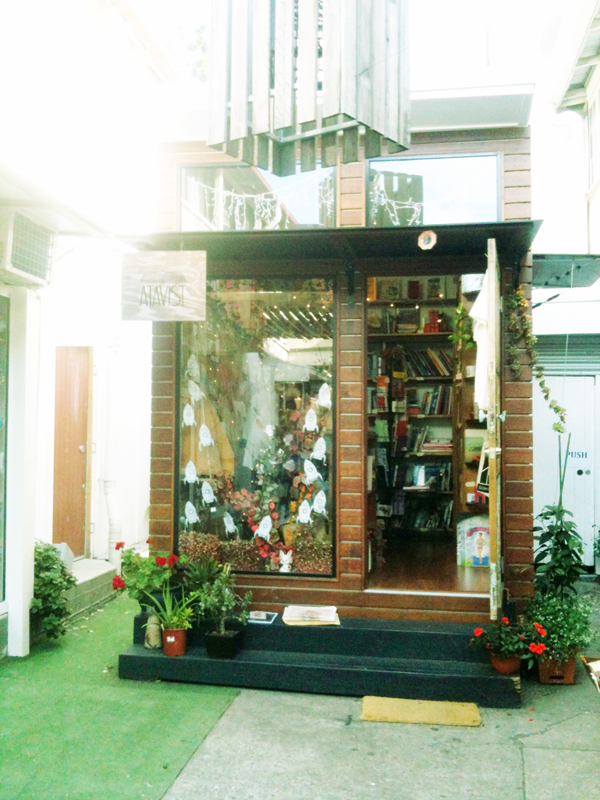 I’m not going to lie, I skipped my next ticketed session to meet my cousin in the city for chili fries, buffalo wings and craft beer at Tipplers Tap in Newstead. It was worth it, as was the quick trip to The Valley to visit Atavist – a, tiny, independent, second-hand book store. The last session of the day and closing night of BWF was “Glitter and Dust”, hosted by the hilarious and charismatic Benjamin Law. Picture this: twenty local and international authors have two minutes each to do whatever they want on stage – read, talk, jump around, kiss someone in the audience (this actually happened). It was a riotous hour and the perfect close to the amazing weekend.

Some people don’t like writer’s festivals, some people do. After BWF, I’m definitely in the latter category. It was such an amazing, rewarding experience to be amongst like-minded people, and to see stereotypically introverted, bookish nerds interacting with each other, bouncing ideas around and basically talking about the kind of things I like talking about. It was inspiring, to say the least. My highlight of the weekend was probably when my advertising/copywriter cousin introduced me to her journalist friend as “a real writer”. Whether she was right or not, there was some definite blushing going on.

Amy is a PhD student in Creative Writing at the University of Newcastle.  She also does freelance writing and subediting for magazines and online editorials.  Amy achieved First Class Honours and a faculty medal for her Honours thesis in 2011. She spent the year of 2012 teaching Pilates, managing a café, moving house three times, travelling overseas, and generally resting her brain before settling back into academic life.  Amy’s postgrad study is a continuation of her Honours research – multiple-voiced discourse, power relationships and realism in Young Adult literature. Maybe, one day, she will try and publish her writing.